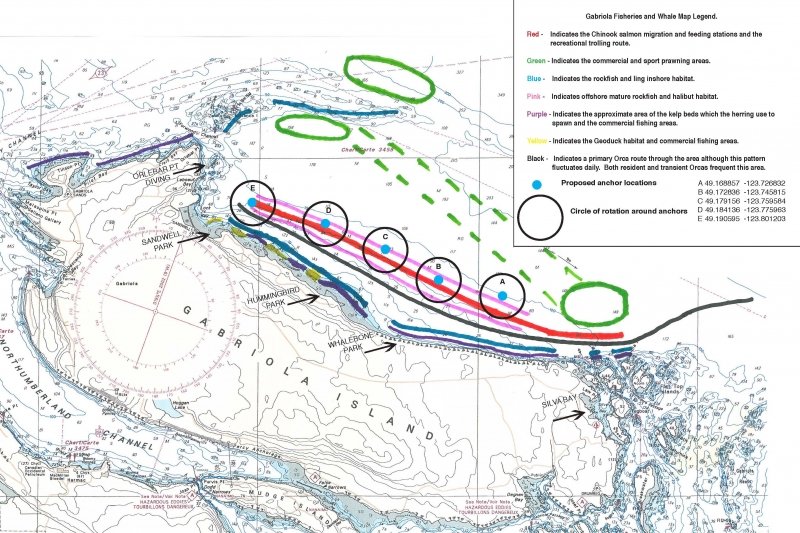 Here is the full letter from Sheila Malcolmson, the MP for Nanaimo-Ladysmith, to Prime Minister Justin Trudeau and Transport Minister Marc Garneau regarding five bulk freighter anchorages being proposed for the northeast coast of Gabriola Island. You can access a PDF of the official letter and a map at the bottom of the page.

Five commercial deep-sea anchorages for freighters proposed for the Salish Sea/Strait of Georgia, off Gabriola Island’s northeast coast, are causing deep concern in my community.

In my former role as the Chair of the Islands Trust Council, I had direct experience with the threats and impacts of commercial anchorages on the residents and environment of this sensitive coastal region. Since my election as the Member of Parliament for Nanaimo-Ladysmith, it has become more apparent that the deep-sea anchorages have no visible local benefit, they threaten my community and our coast, and they are creating great anxiety.

In light of the environmental, economic and social risks of proceeding with more anchorages, the deep level of community concern, and the poor state of federal review processes, I ask that you request the Pacific Pilotage Authority to withdraw its application for five Gabriola deep-sea anchorages.

Agreeing to my request and cancelling the deep-sea anchorages would have the following benefits:

Your government would demonstrate its respect for the rights of Indigenous communities, in particular the Snuneymuxw First Nation in whose territory the deep-sea anchorages are proposed. The Environmental Overview Assessment (EOA) requested by the Pacific Pilotage Authority has described the process so far as inadequate: “… the lack of Public/First Nations consultation leaves potential for significant effects to occur within social components, including those assessed within the EOA (i.e., noise, light and fisheries).”

It might save our coast from an oil spill: five years ago three bulk carriers in the Plumper Sound anchorage grounded or drifted very close to land during storms. “The incident with the Hebei Lion … posed a significant risk of a large black oil spill… Damage to fuel tanks on a cargo ship that size could have oiled the islands on both sides of the border.”

It gives the industry time to build good will and demonstrate with existing anchorages that it can mitigate impacts on neighbours, something that has not been done on our coast. Existing anchorages in Plumper Sound, Cowichan Bay and off Protection Island cause visual and diesel smoke pollution, engine and generator noise, and excessive light pollution3, which industry has not mitigated. Surely the government will not approve redistributing these impacts to other coastal communities.

It would be consistent with your government’s promise to make decisions based on science, facts and evidence. The Anchorage proposal cannot proceed as-is, because “there is a lack of specific, quantitative information” and a “quantitative assessment of the Anchorage area was largely absent.”

Cancelling the deep-sea anchorages would protect Species-At-Risk, consistent with your campaign commitment to honour the Species-At-Risk Act. British Columbia’s ‘international treasure,’ glass sponge reefs, are threatened by deep-sea anchorages. And the northeast coast of Gabriola Island is a transit and feeding area for the Southern Resident Orca, listed as endangered or threatened under the Species-at-Risk Act (ship noise and geolocation equipment threaten Orca whales by inhibiting their ability to communicate and find prey)
Cancelling the deep-sea anchorages would prevent harm to other marine species. Otherwise, “marine mammals may be killed or injured by ship strike” and “anchor drag/scour-causing localized destruction of fish habitat and individual fish mortality,” and “water quality, terrestrial mammals and marine birds, marine mammals, fish and aquatic habitat and Aboriginal, recreational and commercial fisheries, may be significantly impacted if a deleterious substance is released to the aquatic environment.”

Cancelling the deep-sea anchorages would support your government’s efforts to persuade other countries to adopt less polluting sources of energy by replacing coal power6. These deep-sea anchorages are proposed to accommodate the export of Wyoming coal to China power plants. Every West Coast port in the United States has refused to export Wyoming coal to China. In Canada, every BC municipality bordering the Port of Metro Vancouver opposed these exports as well.

Cancelling the deep-sea anchorages is consistent with your promise not to foist development on unwilling communities. Elected bodies on record as opposed are: the Gabriola Island Trust Local Committee, Islands Trust Council, and the Regional District of Nanaimo. Also opposed are the Gabriola Chamber of Commerce and the grassroots organization Gabriolans Against Freighter Anchorages Society. As said in your electoral platform: “While governments grant permits for resource development, only communities can grant permission.”

Canadians need to see your actions match your words. I believe your government’s credibility will be harmed if you allow this project to proceed.

In light of the environmental, economic and social risks of proceeding with more deep-sea anchorages and the deep level of community concern, I request that the Pacific Pilotage Authority withdraw its anchorages application. This would increase credibility for the federal government’s review of environmental and regulatory processes, which include: restoring lost protections and introducing modern safeguards to the Fisheries Act and the Navigation Protection Act, reviewing federal environmental assessment processes, adopting climate change legislation that includes upstream and downstream greenhouse gas emissions in environmental assessment reviews, implementing the Salish Sea National Marine Conservation Area, and implementing the federal government’s responsibilities under the Species At Risk Act.

Frankly, our communities might constructively participate in these reviews if they are not forced to actively resist misguided project proposals and defend our coast.